DJ Uiagalelie threw for one touchdown and ran for another, overcoming a sluggish start in the season opener as No. 4 Clemson pulled away for a 41-10 victory over Georgia Tech on Monday night.

Uiagalelie completed 19 of 32 passes for 209 yards, including a 6-yard scoring play to Beaux Collins that gave the Tigers a two-touchdown lead in the first half.

Georgia Tech, looking to improve on three straight three-win seasons that have put coach Geoff Collins on the hot seat, kept it closer than expected much of the way.

But the Yellow Jackets couldn't overcome two blocked punts, both of which led to short touchdown runs by Will Shipley.

Will Shipley #1 of the Clemson Tigers reacts after rushing for a touchdown against the Georgia Tech Yellow Jackets during the second quarter with Marcus Tate #74 at Mercedes-Benz Stadium on September 05, 2022, in Atlanta, Georgia.
(Kevin C. Cox/Getty Images)

Georgia Tech pulled within 14-10 on an impressive drive in the third quarter, culminating with Jeff Sims tossing a 13-yard TD pass to 6-foot-7 transfer E.J. Jenkins.

But Uiagalelie, in what was probably the play of the game, appeared headed for a sack when he was cornered by two Georgia Tech defenders on the third-and-4. But the quarterback managed to stay upright just long enough to flip a lateral to Shipley, who rumbled 10 yards to keep the Clemson offense on the field.

“I was trying to get out of the pocket, trying to buy some time to get the ball away,” Uiagalelie said. “As I was going to the ground I looked to my left and saw Shipley there. I just pitched it to him. He made a great run.”

The Tigers drove 74 yards for a touchdown that finally buried the Yellow Jackets. Uiagalelie ran it in from 9 yards out to push Clemson's lead to 24-10.

“I'm really happy with DJ,” coach Dabo Swinney said. “Hey, they made a little run. Next thing you know, it's a little tight. The offense has to answer.”

Clemson scored its first touchdown off special teams after both teams had early struggles on offense.

Carson Donnelly broke through the line untouched and smothered a punt by David Shanahan. Brannon Specter scooped up the ball at the Georgia Tech 18 and took it down the 5 before he was knocked out bounds.

DJ Uiagalelei #5 of the Clemson Tigers looks to pass against the Georgia Tech Yellow Jackets during the second quarter at Mercedes-Benz Stadium on September 05, 2022, in Atlanta, Georgia.
(Kevin C. Cox/Getty Images)

Sims threw an interception on Georgia Tech's first play of the season, an ill-advised deep pass while under pressure that was picked off by Andrew Mukuba.

The Yellow Jackets' third-year quarterback is considered a key to the team's chances of a turnaround season, so much so that Collins brought in Chip Long as offensive coordinator and Chris Weinke as quarterbacks coach with the specific goal of getting more consistent play out of Sims.

He showed flashes both throwing and running, but it wasn't nearly enough to pull off the upset. Sims threw for 164 yards and led the team in rushing with 41 yards.

The second Chick-fil-A Kickoff Game of the Labor Day weekend was played before a crowd at 47,712 at Mercedes-Benz Stadium, where the upper deck was closed off to prevent it from looking like a Clemson home game.

As it was, at least half the crowd appeared to be decked out in orange.

Highly touted freshman Cade Klubnik got a big cheer from what was left of the Clemson crowd when he came in at quarterback with the victory secured.

Klubnik led the Tigers to their final touchdown on his only possession, completing 4 of 6 passes 49 yards including a 3-yard score to Will Taylor.

“We weren't trying to run the score up,” Swinney said. “But we just needed to let him play, so we could get real meaningful snaps there.”

Clemson: Coming off a 10-3 season that was considered a disappointment by the Tigers' lofty standards, this team still appears to be a work in progress.

For the first time in Swinney's 14 full seasons as coach, Clemson is breaking in two new coordinators, so it might take a while to get everyone on the same page.

But the offensive line hardly looked dominating until the fourth quarter and there was a stark difference between the nation's third- and fourth-ranked teams. No. 3 Georgia blew out No. 11 Oregon 49-3 in the first Kickoff Game on Saturday.

Georgia Tech: Collins appears to have done little to correct some familiar problems that plagued his first three years in Atlanta.

There were far too many penalties, including a host of false starts, an unnecessary pass interference penalty that extended a drive when the Yellow Jackets had momentum, and a targeting call that led to the ejection of Charlie Thomas.

Plus, the special teams were a mess. Two blocked punts are inexcusable.

“We've got to get that fixed. Those things cannot happen,” Collins said. “Very disappointing.”

Clemson will probably stay about where it is in The Associated Press rankings after pulling away to make the final score in the expected range.

Cade Klubnik #2 of the Clemson Tigers celebrates passing for a touchdown to Will Taylor #16 against the Georgia Tech Yellow Jackets during the fourth quarter at Mercedes-Benz Stadium on September 05, 2022, in Atlanta, Georgia.
(Kevin C. Cox/Getty Images)

Clemson: Takes on Furman, a member of the FCS Southern Conference, in its home opener Saturday. It's a short trip for the Paladins, whose campus is about 35 miles from Death Valley. 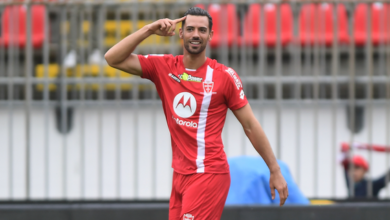 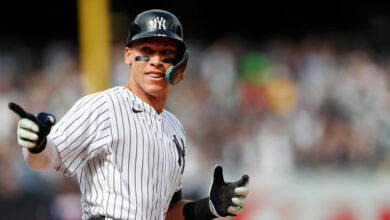 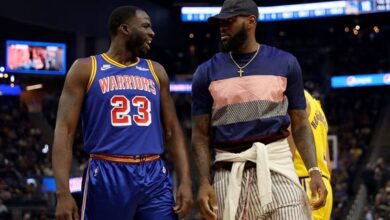 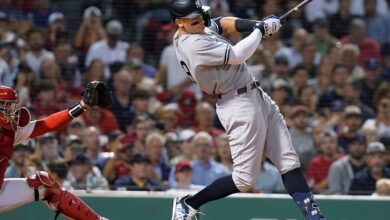