There will always be Saturdays during the college football season when the outlook looks bleak, when college football fans start thinking about the errands they’ll get done due to a less-than-stellar slate.

It’s a trap. Don’t let the naysayers get you down.

The Penn State Nittany Lion mascot leads the charge onto the field before a game against the Ohio Bobcats Sept. 10, 2022, at Beaver Stadium in University Park, Pa.
(Gregory Fisher/Icon Sportswire via Getty Images)

On the surface, Week 3 is not loaded with quality matchups. Just two matchups between Top-25 teams are on the schedule with many of the big boys playing the cupcake portions of their schedules.

ALABAMA’S NICK SABAN ON ‘HORNS DOWN’ GESTURE: ‘IT’S NOT CLASSY’

But if we take anything away from Week 2, it's that any given Saturday can lead to college football chaos.

Two top-10 teams went down to unranked opponents in Week 2, and Texas almost pulled off the upset of the year against No. 1 Alabama.

So, stay strong. Leave those errands for another day.

Let’s take a look at a few games to be aware of Saturday as the college football season kicks off Week 3.

Yes. Nebraska is in absolute free fall, firing head coach Scott Frost after an embarrassing loss to Georgia Southern in Week 2. The Cornhuskers have not won more than five games since the 2016 season, have lost 10 consecutive one-score games and are an afterthought in the Big Ten.

But this is Oklahoma vs. Nebraska. One of the great rivalries in college football is being played at Lincoln Memorial Stadium for the first time since 2009 before another sellout crowd.

It’s a must watch.

Oklahoma, in its first year under head coach Brent Venables, has started its season 2-0 after defeating UTEP and Kent State. Central Florida transfer Dillon Gabriel will be playing his first road game as a Sooner against a defense that ranks 124th in the country in total defense.

Against Georgia Southern, the Nebraska defense allowed 642 total yards, including 409 through the air.

“I met with Coach Chinander [defensive coordinator], and we are going to play faster,” interim head coach Mickey Joseph told reporters in Lincoln this week, according to ESPN. “We are going to tackle in practice. We are going to detail what we are doing with our kids. We are going to make our kids hold themselves accountable.”

The Sooners allowed 164 yards rushing in Week 2 against Kent State, and Nebraska running back Anthony Grant is second in the country with 428 yards in three games.

Oklahoma defeated Nebraska in last year’s meeting 23-16, and the Sooners have won six of the last seven meetings.

This one might not be at the top of Saturday’s list, but there's still a decent amount of intrigue.

For Kirby Smart and the Bulldogs, it’s the first true road test of the season and the opening of the SEC schedule. Georgia jumped Alabama in this week’s AP Top 25 poll as the No. 1 team in the country.

Stetson Bennett of the Georgia Bulldogs warms up before a game against the Samford Bulldogs at Sanford Stadium Sept. 10, 2022, in Atlanta.
(Todd Kirkland/Getty Images)

“Right now, the strength of this team is probably its depth up front, experience at quarterback. And a distribution of the ball across the entire offense to make you defend 53 yards,” Smart said. “The evolution is based on what players you have.”

South Carolina is in its second year under head coach Shane Beamer and looking for its second win of the season.

South Carolina allowed 295 yards and five touchdowns on the ground in a 44-30 loss to Arkansas in Week 2.

BYU made its first statement of the 2022 season in Week 2 by beating No. 9 Baylor at home in double overtime. They now get an opportunity to make a statement on the road.

In the first matchup of ranked teams at Autzen Stadium since 2018, Oregon will be looking for its first quality win of the season after getting dominated by Georgia in Week 1.

Bo Nix (10) of the Oregon Ducks passes during the first half of a game against the Eastern Washington Eagles at Autzen Stadium Sept. 10, 2022, in Eugene, Ore.
(Tom Hauck/Getty Images)

Transfer quarterback Bo Nix bounced back from a tough debut against Georgia, throwing for five touchdowns against Eastern Washington in Week 2.

“We wanted to complete passes and run the ball well, and we came out doing that in the first half,” said Nix. “And when you're able to run the ball, it opens up the passing game.”

BYU quarterback Jaren Hall has had a nice start to the season, completing 48 of 71 passes for 522 yards and three touchdowns.

The running game has stalled to start the season, gaining just 83 yards on 33 carries against Baylor. Oregon is allowing 116 yards per game on the ground.

Jaren Hall (3) hands the ball off to Lopini Katoa (4) of the Brigham Young Cougars in the first quarter against the South Florida Bulls at Raymond James Stadium Sept. 3, 2022, in Tampa, Fla.
(Julio Aguilar/Getty Images)

“We just need to do a better job at starting and sustaining our combo blocks because Oregon has great defense. They're fast, they flow, so it's going to be another challenge this week to run the football, and we need to be really consistent in our technique,” BYU offensive lineman Connor Pay said.

Hard to believe, but Saturday’s game will be the first time a Big Ten team has traveled to Jordan-Hare Stadium.

“I think it’s going to be similar to some of the better environments in the country,” Penn State head coach James Franklin said Tuesday. “There’s no doubt about it. Obviously, they take a ton of pride in their program, their university and their community. And obviously, football is really important there and in that region of the country.”

Head coach James Franklin of the Penn State Nittany Lions leads his team onto the field before a game against the Ohio Bobcats at Beaver Stadium Sept. 10, 2022, in State College, Pa.
(Scott Taetsch/Getty Images)

Penn State beat Auburn in last season’s matchup in Happy Valley, 28-10, but much has changed since then. Quarterback Bo Nix transferred to Oregon, and Auburn head coach Bryan Harsin nearly lost his job during a turbulent offseason.

The Tigers’ passing attack has struggled through the first two games, with just one passing touchdown between T.J. Finley and Robby Ashford. Auburn’s running game has led the way, averaging 247.5 yards per game, good for 14th in the country.

But Penn State is allowing just 80 yards per game on the ground, and with the lack of a passing attack from Auburn should be able to focus on running back Tank Bigsby.

View of Jordan-Hare Stadium during a game between the Auburn Tigers and Tennessee Volunteers Oct. 13, 2018, in Auburn, Ala.
(Michael Chang/Getty Images)

It’s an opportunity for Miami and first-year head coach Mario Cristobal to prove they belong back in the national picture and a chance for Jimbo Fisher and the Aggies to wash off the stink from a Week 2 loss to Appalachian State.

On Friday, multiple outlets reported that the Aggies are making a change at quarterback, starting LSU transfer Max Johnson against the Hurricanes.

Miami is 33rd in the country defensively, allowing just 286.5 yards per game in two wins over Bethune-Cookman and Southern Mississippi.

“Well, in every way, they’re really really big, powerful, explosive guys with a lot of length and a lot of range,” Cristobal said when asked about Texas A&M’s offensive line. “They’re explosive and twitchy, that’s a difficult combination when guys are big and powerful.”

It’s gut check time for the Aggies as they wrap up their non-conference schedule before taking on the gauntlet that is the SEC West.

“We’re very disappointed,” Fisher said, according to Outkick. “Have to get back out there right now fundamentally. We’ve got a very good Miami team coming in here that’s going to get our attention very, very quickly, and does right now. We have to go play well.”

A Texas A and M helmet on the field during a game against the Appalachian State Mountaineers at Kyle Field Sept. 10, 2022, in College Station, Texas.
(Ken Murray/Icon Sportswire via Getty Images)

Miami arrives in College Station, Texas, with its offense rolling and 16th in the country in yards per game (518 yards per game), but it received bad news Thursday when it was reported that leading receiver Xavier Restrepo will miss the game with a foot injury. 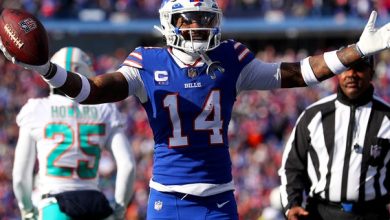 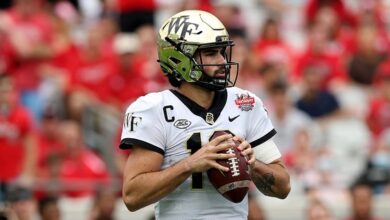 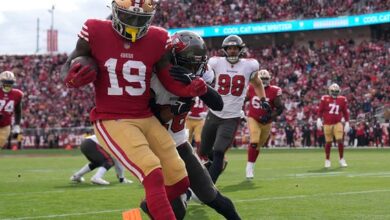