With the 2022 NFL season beginning Thursday night, the league will hold a moment of silence to honor Queen Elizabeth II prior to the start of the game between the Buffalo Bills and the Los Angeles Rams, according to TMZ.

Los Angeles Rams players run off the field before a game against the Cincinnati Bengals Aug. 27, 2022, at Paycor Stadium in Cincinnati.
(Ian Johnson/Icon Sportswire via Getty Images)

The kickoff between the Bills and Rams is scheduled for 8:20 pm. ET.

It’s one of many tributes to Queen Elizabeth II from the sports world following news of her death Thursday.

The DP World Tour halted play at the BMW PGA Championship on Thursday and suspended play for Friday.

“Out of respect to Her Majesty and the Royal Family, play has been suspended at the BMW PGA Championship at Wentworth Club for the remainder of Thursday, and flags at Wentworth Club will be lowered to half-mast,” the DP World Tour said on Twitter.

Flags are removed as a mark of respect after play is suspended following the announcement of the death of Queen Elizabeth II during the BMW PGA Championship at Wentworth Golf Club, Virginia Water, Thursday, Sept. 8, 2022.
(Adam Davy/PA Images via Getty Images)

“Furthermore, no play will take place at the BMW PGA Championship Friday and the golf course and practice facilities will be closed.”

The NFL logo is emblazoned across the middle of the field at SoFi Stadium prior to the Super Bowl Feb. 13, 2022.
(Maximilian Haupt/picture alliance via Getty Images)

“The Premier League is deeply saddened to hear of the passing of Her Majesty The Queen, Elizabeth II,” the league said via Twitter. “Our thoughts and condolences are with The Royal Family and everyone around the world mourning the loss of Her Majesty.” 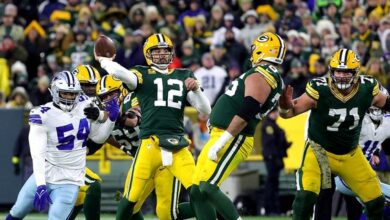 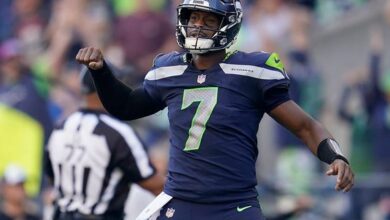 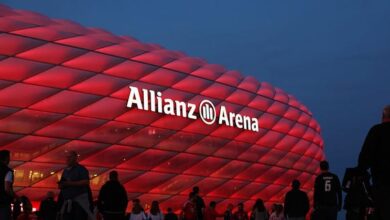 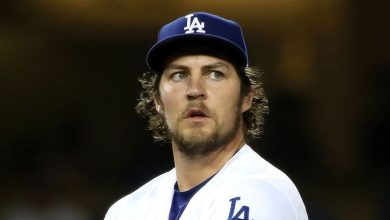