It wasn’t long after Denise Nicole Pyfrom gave an inch, so to speak, that she came across Daniel Evan White on Hinge in January 2019. The two, then living in Manhattan, matched on the dating app once Ms. Pyfrom changed her preferences from a minimum height of 6 feet to 5 feet 11 inches.

His profile also noted that he had graduated from West Point, which caught the eye of Ms. Pyfrom, 30, whose brother had graduated from the Naval Academy. “Something in my gut said, if he’s not a lover, he’s probably a friend,” she said.

When they matched, Mr. White was settling into civilian life following several years of active duty, which included deployments to Kuwait, Iraq and Jordan in 2014. He now works as the special assistant to the Assistant Secretary of the Army for Manpower and Reserve Affairs, and in May 2020 completed a graduate degree in international security policy at Columbia.

As someone who considered the military a big part of his identity, he appreciated that Ms. Pyfrom could understand what that service meant to him as a Black man.

“Black people have a unique practice of patriotism,” Mr. White said, explaining that while he and many Black veterans are proud to have served their country, its history of racism is not something he can ignore.

After they connected on Hinge in early January, he invited Ms. Pyfrom, who holds a bachelor’s degree in English from Boston College and an M.B.A. from Columbia, on a first date at the Dead Poet bar on Manhattan’s Upper West Side. As she sipped a spiced-rum cocktail named for Pablo Neruda, Mr. White asked her many “leading questions,” she said, that showed he wanted to get to know her.

They were still getting to know one another by the time of their second date days later, when Mr. White revealed that he had not been in many long-term relationships. The admission registered a “question mark” with Ms. Pyfrom, who is a senior manager of global partnerships at the N.B.A. “I didn’t necessarily put a wall up, but I certainly took note of it and tried to be very observant of how he engaged with me from that point forward.”

The two continued to see each other that spring and, as the summer of 2019 approached, they began to discuss their plans for the season. Mr. White had landed a summer internship in Miami for the Department of Defense and wondered if Ms. Pyfrom would visit him.

“Why would I visit someone in Miami who wasn’t my boyfriend?” she recalled telling him, intending to make a statement, not an ultimatum. In response, he asked her to be his girlfriend.

In May 2019, she met his family on a trip to their home in Milton, N.Y., and he met hers soon after on a visit to her childhood home in Princeton, N.J. That June, the two returned to Milton to attend his maternal grandmother’s 90th-birthday party together.

The next year, after the pandemic set in, each told the other “I love you” while they were working remotely at a cabin that Mr. White’s family owns near the Catskills. It was their first attempt at cohabitation and both say their time there was a turning point in their relationship.

They became engaged in November 2021, when Mr. White surprised Ms. Pyfrom with a proposal on Roosevelt Island, where he had persuaded her to go before a party in Brooklyn. Ms. Pyfrom, wearing heels on the cold day, said she became frustrated as he led her around the island because she thought they were lost. Then he pulled out a ring. Later that evening they celebrated with friends and family at the Panorama Room, a rooftop lounge. (They never made it to the party.)

On Aug. 7, they were married by the Rev. Craig S. Campbell, a family friend of the Pyfrom’s and a pastor at Bethlehem Baptist Church in Philadelphia, before roughly 160 vaccinated guests.

As part of the ceremony, the couple, who plan to move into a new home in Washington together this fall, partook in the tradition of jumping the broom. Mr. Campbell also led a tribute to the bride’s father, who died in 2018. Ms. Pyfrom further honored his memory by attaching a locket containing his photo to her bouquet.

In her vows to Mr. White, she said, “I couldn’t explain the timing of how we met, but I had a feeling about who sent him my way.” 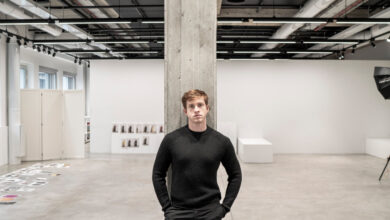 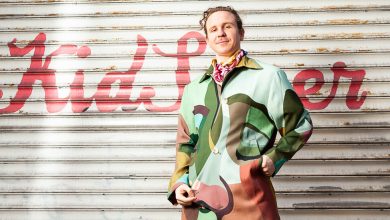 How Not to Be a Character in a ‘Bad Fashion Movie’ 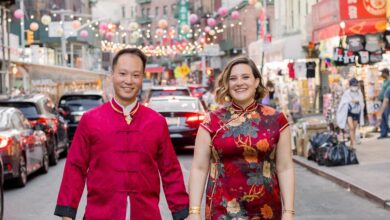 A Relationship With Biblical Origins