Anna Sorokin, who bilked banks and tricked New York’s elite into believing she was a German heiress named Anna Delvey, was released from an immigration detention facility in Goshen, N.Y., on Friday and sent back to Manhattan.

In May 2019, Ms. Sorokin was sentenced to four to 12 years in prison for financial crimes including grand larceny and stealing a private jet. After serving nearly four years, she spent 18 months behind bars in immigration detention for overstaying her visa, after a judge determined she was unrepentant. (Ms. Sorokin, 31, who was born in what was then the Soviet Union, has German citizenship.)

But the federal immigration judge Charles R. Conroy ruled this week that Ms. Sorokin was no longer such a threat — provided she wears an ankle bracelet. She will also be barred from using social media, including the accounts she already has.

While in Immigration and Customs Enforcement detention, Ms. Sorokin accrued one million Instagram followers when her exploits were dramatized this year in a series on Netflix about her time, in her mid-20s, as Anna Delvey, the heiress persona she fabricated. She persuaded some of Manhattan’s elite to believe her fake back story and created a business plan to open an arts social club on Park Avenue South but ultimately went to jail after the project fell apart.

Ms. Sorokin went to banks and other investment groups with her business plan, but prosecutors said she wanted to use the money to pay for her upscale lifestyle. When City National Bank gave her a $100,000 line of credit, she spent $40,000 in a month on designer clothing and luxury hotels, according to evidence presented at trial. By the next month she had gone through the rest of the money, and then some.

With the project quickly fading from reality, she went to Marrakesh with Rachel Williams, a friend at the time, who was a photo editor at Vanity Fair. Ms. Sorokin left her with a $62,000 bill. In 2019, Ms. Williams testified before a jury that the bill, which she had charged on her company credit card and was ultimately reimbursed by American Express, was “the most traumatic experience I’ve ever been through.” The jury found Ms. Sorokin not guilty of stealing money from Ms. Williams, whose book about her experience with Ms. Sorokin was published shortly after the trial. (Ms. Williams had also signed an option with HBO, which has expired, according to her website.)

While in jail, Ms. Sorokin supplied drawings for two art shows inspired by her time as the socialite Anna Delvey, up through her detention. Ms. Sorokin, who said she attended the art and design school Parsons Paris, said she began sketching in earnest during her criminal trial in 2019 and continued in what she said was an effort “to be very honest about my experiences.”

Though she is being released from detention, “this doesn’t mean she gets to stay in the United States,” said John Sandweg, who is representing Ms. Sorokin in her immigration case. “All this means is that she gets to continue to aggressively pursue all her cases out of jail, off the taxpayer’s dime — and she gets to do it from home.”

Mr. Sandweg, who previously served as acting director of Immigration and Customs Enforcement under President Barack Obama, said he took her case because it exemplified larger problems within the immigration system.

“We have an overreliance on detention, and her case is a good example of that,” he said. Referring to the effectiveness of ankle bracelets, Mr. Sandweg added: “But there are robust enforcement mechanisms that are cheaper, more humane and just as effective.”

After her art dealer, Chris Martine, posted bond with a $10,000 cashier’s check on Friday, Ms. Sorokin was processed out of the Orange County Correctional Facility in Goshen and sent to the Jacob K. Javits Federal Building in Lower Manhattan, where she completed additional paperwork, including confirmation of the address where she would fulfill her house arrest requirements. Hours later, Mr. Sandweg said, around 11 p.m., ICE agents drove Ms. Sorokin to her new one-bedroom apartment in the East Village.

Should I Sign a Divorce Agreement With My Mother-in-Law?

Is My Online Fling Holding Me Back From Dating in Real Life? 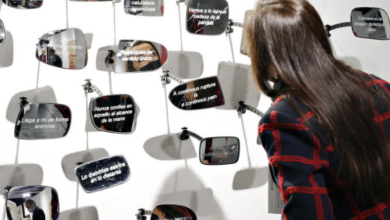 The Sea,The Sun And Diversity At Work At Art Basel Miami Beach!