The storefront was lit up like a stage. People passed by, bundled up, peering into the action. Inside, a small group of friends sipped bubbly, greeted one another with hugs and air kisses and cheered along to a performance by the Broadway performer Jay Armstrong Johnson.

The occasion was the celebration of Boo-Kay, a floral-arrangement store.

Robbie Fairchild, its owner, who is a former New York City Ballet principal dancer and earned a Tony nomination for his lead performance in “An American in Paris,” said his love for dance and flowers started at a young age.

“You could imagine, you have your garden full of fresh flowers and this little boy across the street comes over and cuts them all and gives them to you,” Mr. Fairchild said in a phone interview.

In 2017, while performing “An American in Paris,” in London, Mr. Fairchild’s interest in flowers grew. On his one day off a week, he enrolled in floral-arrangement classes at the Covent Garden Academy of Flowers, which he had passed on his way to the theater day after day. There, he gained formal training and discovered a new passion that felt refreshingly cathartic. “I couldn’t believe how therapeutic it was for me,” he said.

Then, in 2020, the pandemic hit. Like countless others, Mr. Fairchild lost his livelihood, and sought a way to regain the sensation of performance and the feeling of community that his work had given him. He took to dancing on his rooftop, posting a series of videos on Instagram to bring a bit of levity to his followers’ days.

One day, he got a message from a fan. He had starred in the 2019 film adaptation of “Cats,” and a woman was writing to thank him for his performance. She told him his dancing had inspired her daughter to start dance lessons, and to show her gratitude, she wanted to send him a flower delivery. It wasn’t your average bouquet, though: She worked for a flower distributor, and knew that Mr. Fairchild had an interest in floral arrangement. She sent him 200 flowers.

At the time, New Yorkers and others around the world would applaud, bang pots and pans, and cheer together at 7 p.m. as a show of appreciation for health care workers. So Mr. Fairchild had an idea: He went to Mount Sinai West and delivered hand-tied bouquets to people getting off work at the hospital.

He loved the feeling of creating art through flowers and getting to bring some brightness to people during a dark time. “What I didn’t realize is how similar performing was to flower arranging,” Mr. Fairchild said. “You go into a studio and create something and then you bring it to an audience or a recipient.” He realized that it was the “same kind of feeling you get when you walk out of a stage door and there’s some people that are waiting for you because you made their night a little more magical than it would’ve been, had they not seen the show.”

“This feels like how I’m going to get through this,” he added.

Boo-Kay officially opened for business in the summer of 2020. Mr. Fairchild ran it on his own, drumming up business on Instagram, getting the flowers himself, hand-delivering arrangements throughout the city and running the entire business from his bedroom in a fourth-floor walk-up with a roommate. He soon tapped a friend, his fellow Broadway performer Adam Perry, to join the business. It was important to Mr. Fairchild to hire within the performing arts community, giving out-of-work artists both work and the space to be creative. By the fall of 2020, Mr. Fairchild had found a duplex apartment on the Upper West Side of Manhattan and moved the business there.

But as of Wednesday, Boo-Kay has a dedicated New York City space of its own, just blocks from the theater district.

The business has a growing base of clients, including many from the world of Broadway. They recently designed bouquets for the opening of the Museum of Broadway, and there is a Boo-Kay outpost at the London Coliseum, the largest West End theater. The team remains small: Mr. Fairchild, Mr. Perry, the floral operations manager Ian Stack and the business manager Brad Schlagheck. The company sells arrangements online that range in price from $80 for a hand-tied bouquet to $600 for a grander arrangement called “The Showstopper.”

As for the future, Mr. Fairchild said he was grateful to know “how to work with flowers and make them dance.” But he himself is not done dancing yet. “When I look at my career so far, it’s definitely not done.”

For now, he is balancing his performance career with his floral business, and excited about the opportunities ahead of him and his team. One of their dreams is to use the new space, which is open by appointment only, to foster community by offering floral-design classes or wreath-making workshops for the holidays.

At Boo-Kay’s storefront opening event, guests one might recognize from a Playbill toasted to the new shop near a towering, six-foot rainbow floral display. The display window became a stage as Mr. Johnson sang two songs for the intimate crowd, praising Mr. Fairchild and the Boo-Kay team for creating “little artistic oases amid artistic drought.”

Introducing his second song, Mr. Johnson quipped, “Here’s a little song that’s a bit on the nose for this evening.” He sang “The Rose,” drawing laughter when he sang the lyric, “I say love, it is a flower.” He later invited the audience to sing along — a dangerous proposal in perhaps any other room, but not this one. 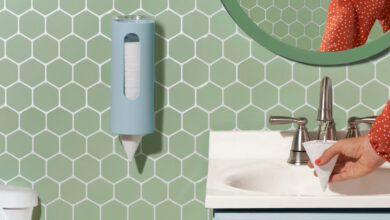 When the Water Cooler Is a Perk 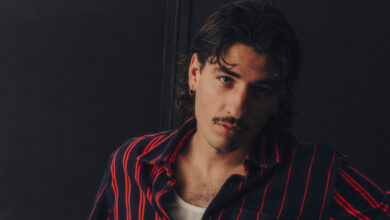 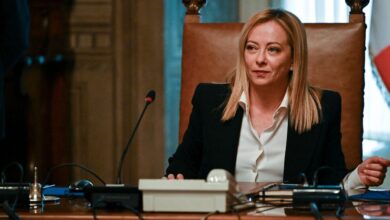 Giorgia Meloni and the Politics of Power Dressing