To hear more audio stories from publications like The New York Times, download Audm for iPhone or Android.

The platform’s annual Spotify Wrapped feature, which shows users what they have listened to over the past year, dropped on Wednesday, and some users were immediately struck by some funny wording they found in the annual marketing campaign. “This year, you had layers like an onion,” it read. “But you listened to music, unlike an onion.”

Spotify Wrapped packages user listening data into easily shareable slides. (Users watch their Wrapped in the Spotify app and tap through like viewing an Instagram Story.) Much of the information is customized for each user, like showing a user’s top artist and song of the year, or the number of genres they listened to and the total minutes they spent on the platform in 2022.

But the information itself is presented similarly to every user. Which is how everyone who opened their Wrapped this week was called an onion.

But who exactly decided we’re all onions and why?

The answer is a creative team that starts six months in advance, according to Alex Bodman, the global executive creative director at Spotify, and Taj Alavi, the company’s global head of marketing. This allows for the time it takes to create versions of Wrapped in more than 70 languages, parsing the text for linguistic nuance from market to market.

The guiding principle, at least where lines like the onion quip are concerned, is simple, though. “We don’t overthink it,” Mr. Bodman said in a phone interview.

“I know some people might imagine with a huge campaign like Wrapped that there is, like, I don’t know, focus groups in a boardroom and that everything is thought through,” Mr. Bodman said. “Honestly, it’s Taj and I sitting in a room and if we see the onion line and we laugh out loud, it’s approved.” He credited the onion line to “one of our talented writers.”

This year’s Wrapped also offered a new feature that categorized the mood of the music a user typically listened to at certain times of day. Morning music may be “yearning” or “feel good,” while afternoon jams may be classified as “pumpkin spice,” “fancy theater” or “angst nervous.” Anyone care for an evening of “kids French cafe”? Or a nice sunrise set to “goblincore”?

If you didn’t know goblincore was real — and just to be clear, Spotify really did describe some users’ tastes that way — you might think that label was fake. Which wouldn’t be surprising given the way social media users regularly create Wrapped memes as a secondary tradition each year when the campaign is released.

In 2021, Senator Chuck Schumer tweeted a Wrapped meme in which he had replaced each of his top songs with a photo of President Biden. Strung together, the song titles, which were laid out like real Spotify Wrapped content, read: “today would be a great day for Joe Biden to #CancelStudentDebt.”

The memes are typically stylized to look very similar to Spotify Wrapped, meaning if you see something particularly funny and purportedly from Wrapped on social media, double check to make sure it’s real. (Evergreen internet advice.)

Valerie Estrina, 24, runs the Instagram account AstroWonders, which focuses on combining astrology and pop culture. On Wednesday, Ms. Estrina, who lives in Paris and works for a tech start-up, posted several Wrapped memes.

“My astrology memes are very specific because they’re sarcastic and self-critical, and people love that,” Ms. Estrina said. “I wanted to go about it in a way that would maybe bring up some of peoples’ insecurities, some of their flaws, but in a very kind way.” She said that Spotify Wrapped, like astrology, can be an “introspective tool.” Plus, the timely memes were good for engagement.

For Levi Bradford, his real Wrapped content was more darkly humorous than any meme. Mr. Bradford, an education lawyer in Baltimore, is in a band called Camp Trash. Spotify offers artists a modified Wrapped that shows their listener data for the year. When Mr. Bradford checked his band’s Wrapped, what he found surprised him.

“It shows you like the one hour of the year that your band was listened to by the most people at one time,” said Mr. Bradford, 28, whose band was most popular on a dark anniversary. “My band’s most listened to hour was literally 8 a.m. to 9 a.m. on January 6, I was like, ‘Oh God, oh no.’”

From Study Hall to Forever Teammates 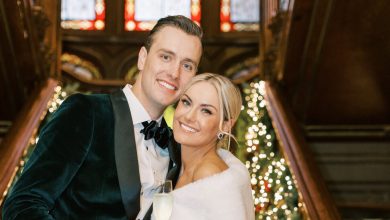 Pajamas and Wet Hair Led to Love at First Sight

Is Lace for Men the Latest Fashion Trend?