Set to a loop of “Hello Operator” by The White Stripes, the show featured pin-thin models parading in skinny jeans tucked into leather boots (some fringed), slinky tops, scarves tied loosely around their necks, suit vests, military-inspired jackets and a series of glamorous dresses. Some of the dresses were languorously cut; others were short, frisky and worn beneath shearling coats.

Seats on the theater’s main floor and in its upper mezzanine were filled with celebrities (Doja Cat, Wiz Khalifa, Brie Larson, Miles Teller, Dustin Hoffman, Priscilla Presley, Paris Hilton), stylists, fashion editors and hundreds of other people that Celine described as “friends of the house.” Attendees wore lanky suits, glittering dresses, bodysuits and enough motorcycle jackets that a reporter was surprised not to see a single motorcycle parked out front.

“I think music is his muse,” Kim Gordon, singer and bassist of the band Sonic Youth, said of Mr. Slimane, whom she first met at the Cannes Film Festival. Ms. Gordon, who is now a visual artist, was later photographed by Mr. Slimane when he helmed Saint Laurent as part of a campaign for the brand. “I mean, he really loves skinny rock dudes,” she added.

“I’d say it’s giving indie sleaze,” the stylist Mel Ottenberg said of the fashion show, using a term popularized by the trend forecaster Mandy Lee to describe a time in the early 2000s when “basics” meant clothes from American Apparel, and when Mary-Kate and Ashley Olsen were known more for partying at the Jane Hotel than for running The Row. “While I was a little horrified by the skintight pants, I trust him,” Mr. Ottenberg, the editor in chief of Interview magazine, added of Mr. Slimane. “If he’s saying they’re coming back, I believe him.”

Where the ‘Rust Belt’ Meets the Runway

Midori Francis Is Among the New Class of ‘Grey’s Anatomy’ 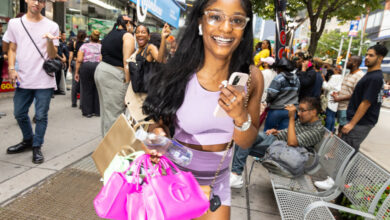