NEWBURGH, N.Y. — While driving to hike in Goosepond Mountain State Park in Chester, N.Y., one Saturday, Grace Briggs and Marie La Tourette passed a building that caught their eyes. It was on Route 17K, and it had a black-and-white striped exterior and a massive green sign above the entrance that read: Newburgh Vintage Emporium Ware-House.

Ms. Briggs, 30, a creative director, had recently moved into a new apartment in Brooklyn; and Ms. La Tourette, 28, a design producer, had a new apartment in Manhattan. Both places still needed furnishings, so they decided to make a pit stop.

Also at the Ware-House that day was Jonathon Chanthamala, a technical designer who lives in Queens. He had traveled by train from Grand Central Terminal to Beacon, N.Y., and then took an Uber across the Newburgh-Beacon Bridge. Mr. Chanthamala, 32, discovered the store on Instagram. A frequent vintage shopper, he made the two-hour trip because he had found it hard to find worthwhile pieces at vintage retailers closer to his home.

“By the time I get the chance to look in the city, it’s always picked over,” Mr. Chanthamala said. “That’s why I thought I’d try my luck out here.”

After combing through the more than 30,000-square-foot space, which used to be a roller rink, Mr. Chanthamala bought a black-and-gold lamp from the 1930s “that’s not traditional looking,” he said. Ms. Briggs left with a dress, boots and a few jackets, while Ms. La Tourette picked up a red leather blazer, blue suede jacket and a leather vest.

The three of them are among a group of resale shoppers who have flocked to the Ware-House and its original sister location, the Newburgh Vintage Emporium, since Anthony Vesnaver and D. Matt Smith became owners of the business in 2019. Mr. Vesnaver and Mr. Smith, who are partners in life, live in nearby Marlboro, N.Y.

Shoppers have included the actress Lucy Hale, who bought an Elvis lamp at the original Emporium, on Route 9W in Newburgh, while filming “The Hating Game” in the Hudson Valley in the fall of 2020. “I didn’t even know it was her until after she already left,” Mr. Vesnaver said.

They also include the actor Nico Tortorella, who has homes in Manhattan and Dutchess County, N.Y. Mx. Tortorella, who uses a gender neutral courtesy title and the pronouns they and them, regularly visits both stores with their partner Bethany Meyers, the founder and chief executive of the Become Project, an online fitness platform.

“There’s really nothing that compares,” Mx. Tortorella, 34, said. “There’s so much there, like anything you could possibly want is there.”

Mx. Tortorella particularly likes the stores’ reliable selection of unusual artworks. Before filming a segment for “MTV Cribs” that was broadcast last September, they bought an eight-foot-tall statue that they had coveted for some time. Named “Harvey & Carol,” the hand-painted piece made from welded aluminum by the artist Steven Zaluski depicts two individuals in an acrobatic pose.

“It weirdly looks like me and Bethany,” Mx. Tortorella said. “We keep it next to the fireplace.”

When Mr. Vesnaver, 41, and Mr. Smith, 40, took over three years ago, there was only the original location. Mr. Smith, who has been a vintage dealer for 15 years, was one of the store’s vendors before he and Mr. Vesnaver, a former executive in the beauty industry, started to run it.

“Business was steady for a bit” after Mr. Smith began selling items at the Emporium in 2016, he said. “But in 2018, sales started to dip. There was no outreach to get new customers to the store.”

The previous owner “couldn’t grow it,” said Bill Rieschl, a vendor at the Emporium since its inception. “The idea of the store was good. The location was good. But it wasn’t a destination.”

One of the first things that the new owners did to attract customers to the original 11,000-square-foot store was to paint its exterior black. “This building is the first thing you see when you arrive in Newburgh” via the New York Thruway, Mr. Vesnaver said. “We didn’t want it to blend into the background anymore.”

Another priority was revising the requirements for becoming a vendor, which now include a ban on selling “junk found in their grandmother’s basement,” as Mr. Smith put it. “Vendors need to sell high-quality, good condition items that are priced very well, and present everything in a way customers haven’t seen before,” he added.

There is also now a three-month trial period, even for veterans like Mr. Rieschl. “Numbers don’t lie,” Mr. Smith said. “We pretty much know if it won’t work out based on sales.” Those who outlast the trial period can rent space to sell their wares for a monthly fee, which starts at $400. Each vendor pays the owners a commission on all sales; Mr. Vesnaver and Mr. Smith declined to say how much it is.

Mr. Vesnaver and Mr. Smith said that business soon started to pick up at the Emporium after their changes, so much so that by December 2019, less than a year after they took it over, they had opened the second Ware-House location.

Together, the stores now feature some 150 vendors. Though inventory is constantly changing, it has included Adrian Pearsall couches, authentic Eames chairs, 1950s bathing suits, Lionel train sets and a selection of beat-up, paint-splattered coveralls and work wear pants that Mr. Rieschl sold for $125 a piece, at Mr. Smith’s recommendation.

“Apparently everyone wears this stuff in Brooklyn,” said Mr. Rieschl, who typically sells wood tables and other wood pieces from his Old Wood and Rust booths at both locations.

At the larger Ware-House in particular, he has noticed an uptick in younger shoppers coming from New York City to spend hours sifting through his and other sellers’ items.

“Everyone came out of Brooklyn all of a sudden,” Mr. Rieschl, 65, said. “Now, I don’t even ask where some people came from. I ask, ‘Where in Brooklyn are you from?’ Everyone 25- to 35- years-old who comes here is all somehow from Brooklyn.”

The business’s revival has only furthered what some in the area describe as a sort of renaissance for Newburgh, which was the subject of a 2011 New York Magazine article headlined: “Welcome to Newburgh, Murder Capital of New York.” According to data from New York State, 569 violent crimes occurred in Newburgh in 2011; in 2020 that number was 331.

“Attractions like the Emporium have helped turn Newburgh into a buzzy area that I can only imagine will continue to grow,” said Alexandra Kelly, an owner of Liberty Street Bistro, a local restaurant that opened in 2016.

“Every week I feel like at least one person tells me they came from the Emporium or plan to go,” added Ms. Kelly, who recently hired Mr. Smith to redecorate the dining room of her restaurant with pieces from the stores.

“Anthony and Matt have done something really special here,” said Mr. Rieschl, the vendor. “The Emporium is for the modern vintage lover. It’s not your grandmother’s antique shop.” 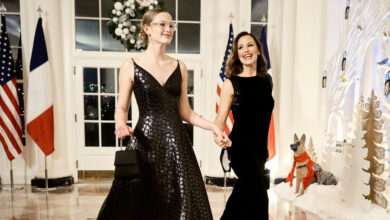 What Should I Wear to a Fancy Holiday Party? 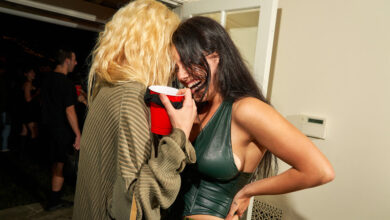 Is Partiful the Least Cringe Option to Get People to Your Event? 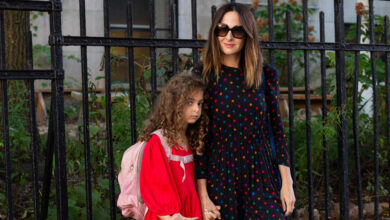 The Art of the School Drop-Off Outfit