If your big idea is dreaming up some new tax that doesn’t impose any political costs on you and yours, then you aren’t serious. Some people think taxes are too high. Some people think taxes are too low. But I wonder whether most of us could agree that we have enough individual taxes — and maybe too many taxes — irrespective of the question of tax rates.

President Joe Biden, who is and always has been a political coward, is talking about a new “billionaires’ tax” that he pretends he wants to see enacted.  The tax would be economically destructive, would produce little revenue, and is almost certainly unconstitutional in that it would tax imaginary income, treating investment gains as actual income: Imagine being taxed on the notional increase in the value of your house over the past few years irrespective of whether you have sold your house and made the money, and you’ll get the general idea. President Biden is intellectually lazy and very well may be somewhere in the general vicinity of positively stupid, but he has enough self-preserving animal cleverness to know that this is unlikely to ever be anything more than a talking point. Senator Joe Manchin has already put his name on its death warrant.

Which is, of course, the point. It is much easier to talk about a theoretical new tax — one that doesn’t actually cost your supporters anything — than to take real steps with the tax code we already have. Easier still if there is no danger of the policy’s being enacted. This is a version of the old sophomoric stratagem, “The ideal version of my hypothetical policy is superior to the non-ideal version of your real-world policy.”

There are more straightforward ways to raise taxes on very high-income people. For example, we could raise the top income-tax rate, maybe creating a $1-million-and-up bracket or a $5-million-and-up bracket on top of the current top bracket, which begins at $539,901 for a single filer or $647,851 for a married couple filing jointly. Or we could raise the rate on investment income, since the billionaires and hectomillionaires our progressive friends like to go on about usually make most of their money from investments rather than from salaries. (You don’t become a billionaire on a regular fortnightly paycheck.) Those would be the most straightforward ways of raising taxes.

There are limits to how much you can soak the rich, of course, because the rich have lots of resources to put into tax-planning and lots of choices about how and when they receive their income. Progressives sometimes talk about the tax code as though it had to be fitted to the complex ways in which corporations and high-income individuals conduct their business without quite seeming to understand that those practices did not appear ex nihilo but developed in response to existing tax incentives. Creating new tax incentives will create new economic behavior.

Presented with that economic reality, the demagogue will reliably turn to cheap moralism, insisting that this is a matter of “fairness,” with the rich failing to “pay their fair share.” We already lean very heavily toward the top for tax revenue, with the top 1 percent paying 40 percent of all federal income taxes while earning only 20 percent of the income, and the top 20 percent of earners paying almost 90 percent of all federal income tax. With the top 1 percent paying a tax burden that is twice its share of income, it would seem to me that they are paying more than their fair share already. But that is the attraction of vague adjectives such as “fair” — it can mean whatever a politician needs it to mean.

But we should keep the basic math in mind there: Concentrating on the top 1 percent for new tax revenue takes 80 percent of all income off the table. It is going to be difficult to raise a lot of new tax revenue when you are fencing off almost all of the potentially taxable income.

That is one reason we should remind our progressive friends — very often — that the difference between the U.S. tax system and the tax regimes of the Scandinavian countries they profess to admire is not how the wealthy are taxed but how the middle classes are taxed: In the United States, a married couple has to earn almost ten times the median income before the top marginal rate kicks in, while in Sweden the top rate applies to those earning only 1.5 times the median income. Put another way, about 1 percent of U.S. households pay the top marginal rate, while one out of three would pay that rate should we follow the Swedish example. And the Swedish top rate is 57 percent to our 37 percent. If you want Scandinavian benefits for the middle classes, you’re probably going to have to impose Scandinavian taxes on the middle classes, too. I don’t think that would be a very good idea, but it would at least be honest — unlike pretending that the middle classes can have their Sweden on the cheap,

Income-tax comparisons get convoluted because the United States has more than one federal income tax — in addition to the one we call the income tax, there is FICA, a bundle of payroll taxes we pay on top of the other income tax, not to mention state and local income taxes. Some of that payroll tax is, in theory, paid by employers rather than by employees, but most economists think that in most cases, employees end up bearing most of the burden through lower wages. Because of the way taxes get spread around through the economy, in a real sense, nobody really knows what the cost of taxes is to his own household, even if he knows to the penny what his 1040 says.

Likewise, while it is the case that billionaires tend to have a lot more investment income than salary income, lots of ordinary middle-income people have investment income, too, in their pensions and retirement funds. As shareholders, they are payers of the corporate income tax and payers of investment taxes, and they benefit from the preferential tax treatment of investment income just like the Wall Street and Silicon Valley guys do. There isn’t any reason we have to tax capital gains in a preferential way; then again, there isn’t any reason we have to tax capital-gains income at all — businesses already pay corporate income tax, and dividends and other profit distributions are paid out of money that already has been subjected to that tax. Some thriving and happy European countries, Switzerland and Belgium among them, do not normally tax capital gains at all. They still manage to fund large, active central governments.

If we want to raise taxes, we already have a lot of taxes to choose from and don’t have any particular need for a new one, unless the point is avoiding talking about realistic near-term options in favor of anodyne hypotheticals. New taxes add new compliance costs, and they also create new opportunities for rent-seeking, backdoor subsidies, and cronyism. In fact, there are some pretty good arguments for having fewer taxes. If the federal government had only one or two taxes to administer rather than a whole bundle of them (income, payroll, gifts, capital gains, dividends, tariffs, estates, tobacco excises, liquor excises, Affordable Care Act excises, airport and airway trust-fund taxes — the list goes on) it might do a better job, and it might spend less money collecting the money it is owed. According to my English-major math, you are better off spending a nickel to collect 75 cents than you are spending 40 cents to collect $1.

There have been some radical ideas for tax reforms over the years. The 19th-century economist Henry George favored a single tax on the value of unimproved land, judging this to be the most fair and economically efficient tax, and the idea has had many admirers over the years, William F. Buckley Jr. among them. I have long thought that libertarians and climate activists ought to consider a joint program for replacing U.S. income taxes with a single tax on greenhouse-gas emissions, which would create desirable climate incentives and relieve us of the necessity of submitting to gross annual violations of our privacy by tax authorities. There are lots of compelling ideas like that, from flat-taxers and fair-taxers and unreconstructed Georgists and other sundry practitioners of wonkery.

None of it is going to happen, of course.

That is all fun stuff for pundits and think-tankers and academics, but, in all likelihood, the tax code we have is pretty much the tax code we are going to have. There isn’t any consensus behind radical reform of the tax code in general, still less consensus behind any particular radical reform, and even less consensus behind any particular radical reform that would be worth a damn. If you are a member of Congress or the president of these United States and you want to raise taxes, then you have a lot of taxes available for raising. If your big idea is dreaming up some new tax that doesn’t impose any political costs on you and yours, then you aren’t serious. In the case of Joe Biden, this is not a revelation of unseriousness, only a confirmation of it.

Because I worry a little more about the effect of heavy public debt than I do about the effect of higher taxes, I am much more open to tax increases than most conservatives are. If somebody with real power were to put forward a robust and plausible fiscal-reform package that addressed the real issues — including entitlements — then accepting some higher taxes as part of a political compromise might turn out to be a pretty good deal. (Details, details, details.) And there is no realistic way to straighten out our fiscal situation without a broad bipartisan consensus — it isn’t something that can be accomplished by members of one party enjoying a temporary majority. As it stands, Republicans and Democrats both are in the same boat, trying to deal with an electorate that demands a higher level of government services than it is willing to pay for. But we can’t have federal spending that is 23 percent of GDP and federal taxes that are 19 percent of GDP — as President Biden proposes — forever.

If your goal is securing sufficient revenue to support federal programs, then the way forward is reasonably clear; but if your program is social leveling, vindictive class-war nonsense, or, as in President Biden’s case, avoiding the real choices before you, then the picture is entirely different. 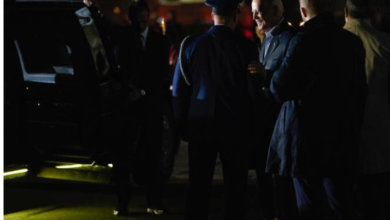 Joe Biden salutes a country support for Ukraine In Poland 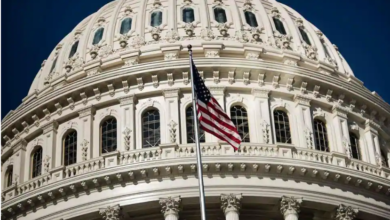