Josh Allen and the Buffalo Bills came into the season with soaring expectations and their sights set on a deep playoff run.

They earned one big prize by clinching their third straight division title. It's just the next step in what they hope is a path toward their ultimate goal.

Devin Singletary and James Cook ran for long touchdowns in the third quarter, and the Bills locked up the AFC East title by beating the Bears 35-13 on Saturday in one of the coldest games played in Chicago.

Allen ran for a TD and threw for another in the game’s closing minutes after breaking a tie early in the game with Hall of Famer Dan Marino for the most touchdowns in a player’s first five NFL seasons. His three TDs in the game highlighted an otherwise subpar outing, but the Bills (12-3) secured their third straight division title with their sixth win in a row.

Devin Singletary #26 of the Buffalo Bills runs for a touchdown during the third quarter in the game against the Chicago Bears at Soldier Field on Dec. 24, 2022 in Chicago, Ill.
(Quinn Harris/Getty Images)

“It's the next progression in our goal — playoffs, division title, and we know what the next one is,” Allen said.

Buffalo remained on track for the No. 1 seed in the AFC. The Bills and West leader Kansas City, who beat Seattle, have identical records, but Buffalo owns the head-to-head tiebreaker after defeating the Chiefs in October.

“The standard has always been playoff caliber, after you set a playoff berth, then it is championship caliber,” defensive tackle Ed Oliver said. “And championship caliber is winning your division, winning our side then obviously playing in that game (Super Bowl) and winning that game. I just feel like there are bigger things out there.”

Chicago’s Justin Fields threw for 119 yards and a touchdown. He was held to a season-low 11 yards as the Bills contained him and kept him in the pocket after joining Michael Vick and Lamar Jackson as the only QBs with 1,000 yards rushing last week.

“The reality of it is I’m not going to be running for like 100 yards a game,” Fields said. “When a defense does a good job of taking my legs away, take a defender with me, maybe take two with me and allow (the running backs') legs to work.”

Devin Singletary #26 of the Buffalo Bills celebrates after a touchdown during the third quarter in the game against the Chicago Bears at Soldier Field on Dec. 24, 2022 in Chicago, Ill.
(Quinn Harris/Getty Images)

The temperature at kickoff was 9 degrees with a wind chill of 12 below zero — only three degrees warmer than the record low for a Bears home game. It was Buffalo’s coldest road game by temperature since at least 1967.

A small gathering of bundled-up fans watched as the Bears (3-12) matched a franchise record with their eighth straight loss.

Singletary ran for 106 yards and became the first Bills player this season to hit triple-digits in a game. He scored on a 33-yard run on the opening drive of the second half to put Buffalo on top, a 2-point conversion pass from Allen to Khalil Shakir making it 14-10.

Cook added a career-high 99 yards, including a 27-yarder in the third following a fumble by the Bears’ David Montgomery gave the Bills a 21-10 lead.

Chicago’s Cairo Santos kicked a field goal early in the fourth quarter that Nicholas Morrow set up by picking off an ill-advised pass. Allen scored from the 4 with just under four minutes remaining and threw a 13-yard TD to Dawson Knox with about a minute to play.

Allen broke the tie with Marino when he hit Gabe Davis with a 19-yarder in the first quarter. He now has 174 touchdowns — 135 passing, 38 rushing and one receiving.

James Cook #28 of the Buffalo Bills rushes for a touchdown against the Chicago Bears during the third quarter of the game at Soldier Field on Dec. 24, 2022 in Chicago, Ill.
(Michael Reaves/Getty Images)

Allen finished with 172 yards, two TD passes and two interceptions even though he was facing a short-handed secondary. Along with the interception by Morrow, he got picked off by Kyler Gordon near the goal line in the second quarter.

“It's not so much the cold as it was the wind,” Allen said. “It just gusts. You don't know really where it's coming from. Sometimes the flags are blowing one way. The next, they're blowing the opposite way.”

Even without big contributions from their star quarterback and receiver, the Bills racked up 426 yards. They ran for 254 and averaged 8.2 per carry.

Dante Pettis had a touchdown catch for Chicago. The Bears joined the 1978 and 2002 squads as the only ones in franchise history to drop eight in a row.

The Bills were spending Christmas Eve in Chicago because of the snow in Buffalo. They were scheduled to fly to Rochester, N.Y., on Sunday morning.

Devin Singletary #26 of the Buffalo Bills celebrates a touchdown during the third quarter in the game against the Chicago Bears at Soldier Field on Dec. 24, 2022 in Chicago, Ill.
(Michael Reaves/Getty Images)

Bills: RG Ryan Bates (knee) was hurt while blocking for Allen on a scramble late in the second quarter. He returned in the third.

Bears: Fields' non-throwing shoulder — the same one he separated late last month — bothered him during the game. He was also hobbling at the end after someone stepped on his foot, though he said he should be “good to go.” OL Michael Schofield III (thumb) was injured on the opening drive, but returned in the second quarter. 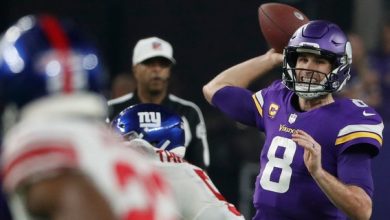 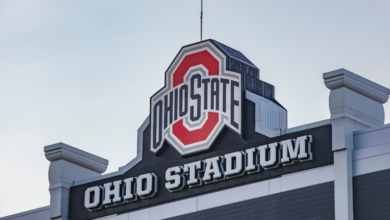 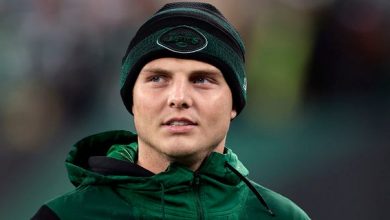 Zach Wilson would have benefited from sitting behind a veteran quarterback, Jets OC says