Days after Unity Sickles Phelan became an apprentice at the New York City Ballet in December 2012, she met Cameron William Dieck in an elevator at Lincoln Center, where the ballet rehearses and performs. Ms. Phelan, then 17, wasn’t sure where to pick up her pointe shoes. Mr. Dieck, a 23-year-old corps member, told her which floor. Each left the elevator with clear impressions of the other.

“I thought, Ah, that’s a friend — someone who’s nice that I can count on,” Ms. Phelan said.

Mr. Dieck braced himself. “She was absolutely gorgeous and super talented,” he said. “I thought, Oh, no, I have a problem.”

Mr. Dieck, who had been dancing with City Ballet since 2007, had heard about Ms. Phelan from friends at the dance company and watched her glancingly during the six-hour rehearsal days.

His problem — wanting to date her while not wanting to make her feel awkward or pressured — resolved itself within her first few weeks. Despite his higher rank at the company, Mr. Dieck was not in a position of authority over Ms. Phelan; he gave into his crush and asked her to coffee. She said she didn’t drink it. “That was strike one,” he said. He struck out a second time before she finally agreed to a date with him on Feb. 10, 2013, days before her 18th birthday, at a restaurant Mr. Dieck had chosen with care. “It was a place called Community, near the Columbia campus,” Ms. Phelan said. “It had ‘Unity’ in the name.”

Ms. Phelan, 27, now a principal dancer with City Ballet, grew up in Princeton, N.J., with an older sister and two younger brothers. Her parents were not hippies, she said by way of explaining her unusual first name. Kimberlee Phelan is a partner at the accounting firm Withum, Smith and Brown, and John Phelan, now retired, was the founder and chief executive of Zweena Health, a health services company. They just liked the idea of “Unity.” So does Ms. Phelan. “I love my name,” she said. “It’s quirky and individual, like myself.”

Her first ballet class, at age 4, was at Princeton Ballet School. Proximity to another student — her sister, Amanda Phelan — was the draw. “I wanted to do everything she did,” she said. By the time she was 10, her parents were relying on the threat of withholding lessons as a motivational tool for chores and good grades. “It would be, ‘Oh, Unity, you have to clean your room if you want to go to ballet.’ Ballet became my through-line.”

At 13, while still taking classes at Princeton, she auditioned for the School of American Ballet and that summer was invited to spend the school year training there in New York City. Her parents thought she was too young. But the following year, when she was invited again, they gave their permission.

The School of American Ballet, also at Lincoln Center, is City Ballet’s training academy. Mr. Dieck’s first experiences dancing in an urban setting took place there, too. He grew up with two sisters, one older and one younger, in Mount Kisco, N.Y. His mother, Eileen Dieck, is a retired doctor of internal medicine who formerly taught at the Masters School in Dobbs Ferry, N.Y. Dr. William Dieck, his father, is an ophthalmologist with Northwell Health who practices in Mount Kisco.

Like Ms. Phelan, Mr. Dieck, 34, followed his older sister, Caitlin Locke, into a dance class before he was eligible for kindergarten (his was a tap class, at Westchester Dance Academy in Mount Kisco). He went there mainly because his mother had a lot to juggle and needed some alone time. “I was a rambunctious kid,” he said. “My mom figured she’d put me in the class with my sister so she could get an hour to herself.”

At 9, a teacher urged him to try for a spot at the School of American Ballet. He auditioned. The same evening, his parents got a call: he was accepted. That fall, the family drove back and forth to Manhattan from Westchester five days a week. “Considering they’re both doctors, that was insane,” he said. But he loved it, especially the competitive spirit in his all-boys class.

By high school, Ms. Phelan and Mr. Dieck both were spending more time in New York than at home. As teenagers, they lived in dorms at the School of American Ballet while attending Professional Children’s School, for working actors and dancers. Mr. Dieck graduated in 2006, Ms. Phelan in 2012. Each secured an apprenticeship with City Ballet within months of earning a high school diploma. Ms. Phelan wasn’t sure hers would amount to much. “I had a huge level of impostor syndrome,” she said. “I never thought I’d get past the apprenticeship to the corps.”

Becoming one of the youngest dancers invited to join the corps, in 2013, helped. But a rise to principal, the ballet world’s top tier, still seemed unthinkable.

After their first date, which ended with a kiss on a freezing Manhattan dock, Ms. Phelan and Mr. Dieck kept seeing each other secretly. “When you get into the New York City Ballet, it’s kind of a yearlong audition, where you’re tried on for size,” Ms. Phelan said. “I was trepidatious about romance while I was an apprentice because I thought the perception might be that I was not focused on getting into the company.”

Mr. Dieck, already a corps member and established in the company, didn’t feel as cautious. But for six months, he played along. “I was like, if it means we’re dating, then OK,” he said, jokingly.

By 2014, their romance was well established — and open to the scrutiny of others. Their only breakup, spurred by well-meaning friends at the ballet, happened that year. “Everyone was like, ‘You guys are committing too early,’” Ms. Phelan said. They decided to take a break, but boomeranged back to each other within a month. “I remember thinking, Oh, I just want to talk to her,” Mr. Dieck said. Ms. Phelan said it was the worst month ever.

Early on, Ms. Phelan’s ascent at the company had reinforced Mr. Dieck’s commitment to dancing. Before they met, that commitment had been waning. “I was disillusioned with it,” he said. “I was still in the corps, and it didn’t look like I was going to get out of the corps.” The excitement of what he called Ms. Phelan’s “meteoric rise,” and of having her nearby, inspired him to stay.

But in 2018, a year after Ms. Phelan was promoted to soloist, Mr. Dieck left the ballet for a much different career, in investment banking. By then, he and Ms. Phelan were living together in a Harlem apartment and knew they wanted to marry each other. Both had taken classes at Fordham while dancing full time. Mr. Dieck graduated in 2017 with a bachelor’s degree in economics. Ms. Phelan finished three years later, with a bachelor’s degree in economics and organizational leadership.

Mr. Dieck’s first banking job, as an analyst at Credit Suisse, rivaled the ballet for its long hours. But it offered a secure financial future. “If someone got sick, I wanted to be able to take care of them,” he said. Also, “in the back of my mind, I always knew that dance was finite.”

His love for Ms. Phelan, who has rarely struggled to find her footing but called his departure from the ballet “difficult” — “I was losing my person, my ally in the building,” she said — felt much the opposite. Mr. Dieck was ready to propose before the pandemic roared in. He planned to surprise Ms. Phelan in London, following her multinational Stars of American Ballet tour, in March 2020, by showing up with an engagement ring. Instead, she had to scramble to find a flight back to New York from Serbia days before the U.S. border closed.

Within weeks of the scratched London plan, they were engaged. It was only a matter of time, both said, until she found the diamond ring he had hidden in their apartment. “I would come home and my underwear drawer would be rearranged,” he said. On March 20, 2020, after a dinner of homemade bread, grilled sausage, cheese and salad, he proposed in their Harlem home.

In October 2021, with City Ballet’s performances still restricted for Covid, Ms. Phelan was promoted to principal dancer. Mr. Dieck’s career had gotten a boost four months earlier when he accepted his current position, as an investment banking associate at J.P. Morgan. For both, “getting to that level feels like the culmination of so much hard work,” Mr. Dieck said. “We feel like we’re quintessential New Yorkers now.”

Ms. Phelan walked down a grassy aisle escorted by both parents in a Lazaro gown with a train and a full tulle skirt, swapping her pointe shoes for block-heeled sandals. She and Mr. Dieck, in a navy tuxedo and velvet loafers, took turns reading handwritten vows. “With you, some of the most mundane parts of life can be beautifully intoxicating,” he said. Ms. Phelan said she loved Mr. Dieck from her soul.

When Mr. Wodin pronounced them married and Mr. Dieck leaned in for a kiss, a field full of well wishers erupted in cheers. Few couples have recessed down the aisle as gracefully.

A Reception Pas De Deux For the couple, “Nutcracker” partners when both were at the New York City Ballet, cutting loose at a reception that followed on the farm came with strings attached. “As dancers, there’s a certain expectation that you show up on the dance floor,” Mr. Dieck said. “It’s our job to deliver.” They jointly choreographed their first dance, to the Sara Bareilles song “I Choose You,” performed live by Kate Davis. The result included lifts and dips. “They made it look effortless,” said one of their friends, Ashley Higgins.

Port in a Storm Amanda Phelan stopped ballet dancing after high school, but has watched her sister’s career take flight with admiration. The same goes for her sister’s relationship with Mr. Dieck. “The chaos of that life is so specific,” she said. “They became each other’s port in a storm at the ballet. When I look at them I think, that’s what love looks like.”

Tiny Love Stories: ‘You Are Unmatchable’ 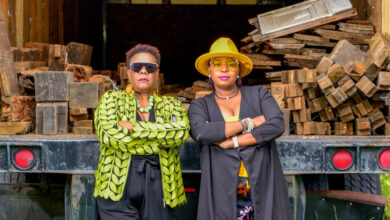 A Hamptons Property Fight Over a Black Whaler’s Homestead 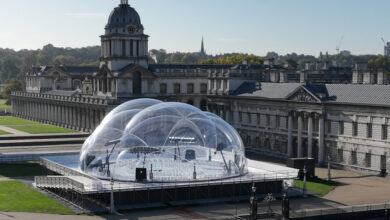 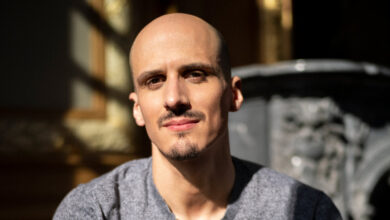 Succession, Nepotism or Just a New Generation in Watches?